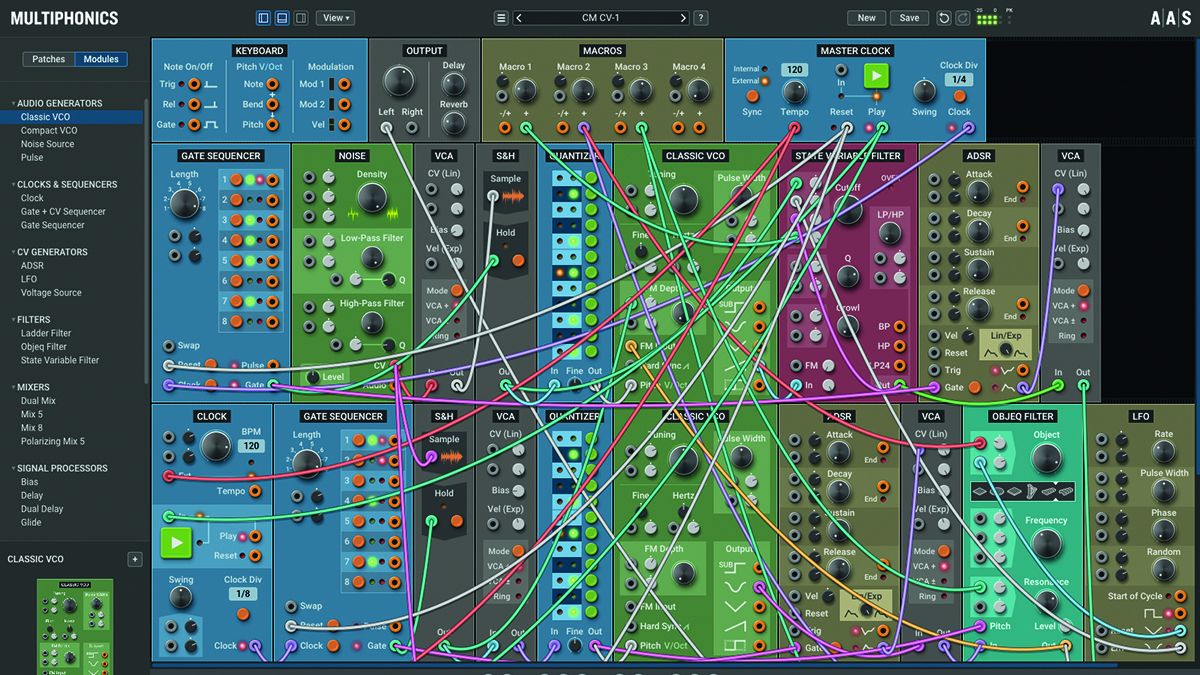 Applied Acoustics Systems Multiphonics CV-1: What is it?

Although there is nothing new in modular synthesis, the undeniable rise of the Eurorack format in recent years has prompted a number of companies to explore the concept by creating modular software. This desktop-based format has found companions in both desktop die-hards and modularity enthusiasts themselves, thanks in part to its attractive cost, as well as the ability to save patches. and implement them directly with your DAW.

Canadian developer Applied Acoustics Systems is no stranger to software. It’s the developer behind an ever-growing catalog of superbly usable instruments such as the acclaimed Chromaphone 3 synthesizer and the excellent Lounge Lizard EP-4 electric piano simulator.

Multiphonics CV-1 breaks new ground for AAS, providing a modular synthesizer environment, which can be used in standalone form or as a plug-in in your DAW. As any modular synth user more accustomed to hardware will tell you, there’s something quite alluring about an instrument you can use without having to load up your DAW. But before we start to understand why this is such a deep-rooted desire, let’s dive into the basics.

Multiphonics CV-1 offers a fully-fledged modular experience, which begins with a virtual rack enclosure, into which you can load modules. At the current count, there are 37 modules available. Some of these will be intrinsic to sound creation, while others will shape the sound, trigger tones, or provide utility-style operation, all within the confines of a modular system. These utility modules are invaluable, although they may only do something as basic as signal summing.

• VCV Rack 2
Now in its version 2 form, available as a free package or paid Pro version, for high-end setups.

The concept of creating patches is identical to that found in the hardware modular domain. For a basic subtractive synthesis patch, you’ll need the usual common denominators of an oscillator, filter, envelope, and amplifier. Loading modules into the virtual rack is a simple process of selecting the module menu and clicking on the required module. Modules can then be moved around, simplifying your patch flow, while connections are made via virtual patch cables, by clicking on an input or output, and dragging the cable to the appropriate connection point . Unlike modular hardware, you won’t struggle with getting the right length of cable, as all cables will adjust according to the connection you want to make. You also won’t have excess cables hanging in the way of the modules you’ve been trying to work with!

If you are new to the modular environment, it would be very helpful to visit and view some of the walkthroughs available on the AAS website, to get a feel for the modular concept. There’s also a great selection of patches, organized into categories, such as bass, leads, percussion, and generative patches.

If you want to keep things simple to start with, there are four audio generator modules available, to form the starting point for a subtractive patch. Two of these are more conventional VCO style modules, while a specific Pulse VCO and Noise module is also available.

To add to the oscillators, there are three different filter modules; the first is a regular ladder filter, which is equipped with four different slopes from 6dB to 24dB. The built-in addition of an overdrive allows the ladder filter to be overdriven. Meanwhile, there’s also a state-variable filter module, which will happily move between high-pass and low-pass states, with the addition of a band-pass option.

The third module is the most unique of the three; The Objeq filter is a form of modeling filter, which is influenced by shapes such as drumheads, strings and membranes, and allows for a unique sweeping effect, as you move between filter shapes. As we are in the modular realm this is open to modulation from a number of sources and can create some very beautiful and inspiring tones from even the most minimal oscillator inputs.

The CV-1 also includes envelopes, LFOs and VCAs, among the core set of modules. The envelope module is a 4-stage ADSR, with the VCA modules available in solo or duo form, along with a Low Pass Gate.

When setting up the most basic patches, you will still need to provide the envelope with a trigger input and an accompanying envelope output, routed to your VCA. It’s relatively self-explanatory for anyone familiar with the modular concept, but it might take a bit of manual diving, or reverse engineering of existing fixes, for anyone new to the modular world.

One of the alluring elements of the CV-1 is that it is a self-contained, breathing, growing organic instrument. While many modular users will use their hardware in the conventional way by creating subtractive synth patches (albeit complex in nature), it’s incredibly appealing to use a modular in a generative way.

This means that the modular itself can create the very notes that are triggered, completely randomly. If that sounds a bit random, it can be, but it’s also very plausible to impose constraints at the generation level. By applying these constraints through things like quantization modules, the output can be less random and more scalic or sequential. It’s also possible to arrange the patches so that a root note can serve as the basis for your sequence, meaning it’s much easier to use in your production and DAW, if needed. Creating generative patches is the modular equivalent of disappearing down the rabbit hole, and you can find yourself in a time void, while creating such a patch.

Fortunately, AAS provides a number of generative fixes in a predefined section. This is not only useful for inclusion in your own music, but also as a point of reverse engineering, to find out how patches were created. As with all modular setups and software, you can go as far in the process as you want!

Taking CV-1 beyond the basic steps is a quick concept. The more modules you add, the more things you will need, such as mixers, in order to sum the signals and output them appropriately.

Thanks to the addition of on-board sequencers, these can easily be synchronized to the master clock module, at the top of the rack. This, in turn, will lock into your DAW, meaning you can create sequences in the modular, to trigger into your overall production. Add a slew of signal processing modules, to process both audio and CV, and it’s a whole lot of creativity.

Sonically, the CV-1 can sound beautiful and aggressive in equal amounts. The filters are beautiful and wispy, while the Objeq filter is an incredibly inspiring tool. As with any complex sound-making instrument of its kind, it’s inspiring on a preset level, but still rewarding on a creative level, if you have the time to get your hands dirty and create patches from scratch. And it doesn’t get much more rewarding than that!

MusicRadar’s verdict: If you’re keen to dive into the modular realm, this is a great, cost-effective way to get started and sounds superb.

Why Chlöe was afraid to go solo