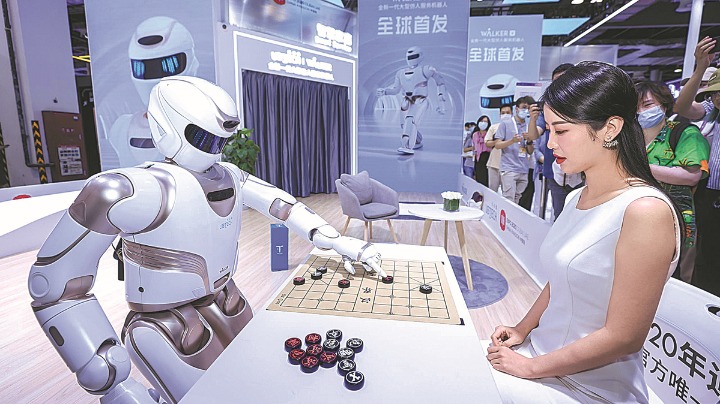 Artificial intelligence, a key technology for driving digital transformation, is playing an increasingly vital role in accelerating China’s push for industrial upgrading and promoting the deep integration of the digital economy. and the real economy, business leaders and experts said.

Significant progress has been made in the development of China’s AI industry, with technological innovation capabilities in some areas ranking among the best in the world, they said.

A Stanford University report showed that China filed more than half of the world’s AI patent applications last year, and the country continues to lead the world in number of journals, articles conference and related publications on AI.

The report says Chinese researchers have been the most prolific in recent years, publishing 27.5% of all AI journal articles globally, while American researchers accounted for 12%. Articles from Chinese journals also surpassed those from other countries for citations, an indicator of their scientific importance.

Official data showed that the value of China’s major AI industries exceeds 400 billion yuan ($56.6 billion), and the number of related enterprises is over 3,000, with major breakthroughs in key core technologies such as smart chips and open source frameworks. .

Chinese tech companies have invested heavily in AI-based research and development. In 2017, Baidu was chosen to lead the establishment of the National Deep Learning AI Lab. Autonomous driving technologies are important to this national research project.

Robin Li, co-founder and CEO of Baidu, said the application of AI technology is reshaping the industry landscape and will be a transformational force revolutionizing development over the next 40 years.

The goal of the intelligent transformation of industries and society brought about by AI is to meet the needs of people – making sense of technology only if it serves humanity by creating more value and contributing to the company, Li said.

“Baidu’s approach to AI technology has always been about delivering equitable outcomes by making technology more accessible, providing freedom and opportunity for everyone,” Li said.

Zhou Hongyi, founder of cybersecurity firm 360 Security Group, stressed the importance of advancing the digital transformation of micro, small and medium-sized enterprises, or MSMEs, as they face increasing pressures and challenges from scarcity. of capital, talent and technology. .

More efforts should be made to leverage digital technologies to help such enterprises, which play a vital role in narrowing income gaps and boosting the development of the real economy, Zhou said, adding that the company will step up its efforts to offer SaaS, or software as such. a service and help drive the digitization push of MSMEs.

Xiang Ligang, general manager of the Information Consumption Alliance, a telecommunications industry association, praised the country’s intensified efforts to develop digital technologies represented by AI, which will give new impetus to the country’s economic growth. and accelerate digital and intelligent upgrades in enterprises.