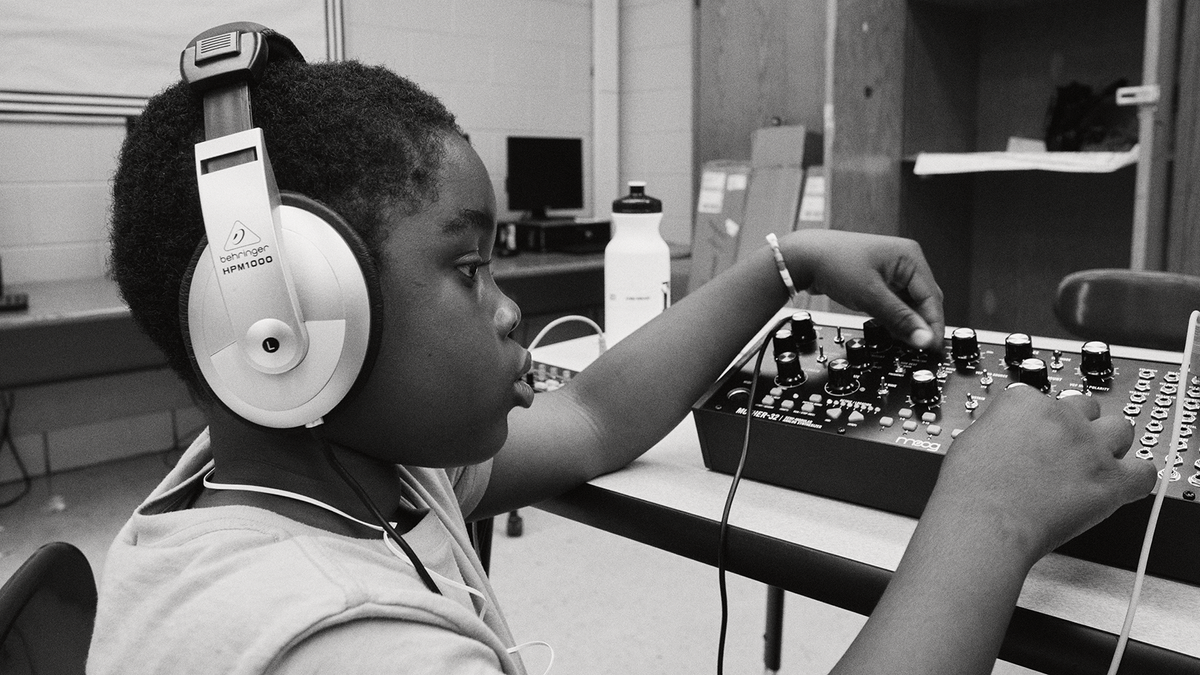 Modular synthesis, especially Eurorack, is often considered one of the most esoteric areas of music technology: even seasoned synthesists can be rendered tentative due to its perceived complexity and fidelity, and especially its cost.

Aaron Guice, founder of AFRORACK, has other ideas. A thriving synthesis education initiative focused on educating and empowering youth of color in the world of electronic music and sound design, AFRORACK represents a crucial voice, both in the modular synthesis community and in the electronic music landscape in general.

Not only is it a clear demonstration that synthesis is for everyone – regardless of age, background, musical experience or ethnicity – but it also facilitates a great entry point for these young people into the music and audio engineering industries, and the broader STEM field – fields based on science, technology, engineering and mathematics.

I’m sitting with Guice in a cafe in central London, just under a week after Black History Month. Having started AFRORACK in his native Chicago, he travels to the UK to continue the work of a new branch of the organization, AFRORACK London.

An AFRORACK workshop will typically consist of a set of electronic instruments, usually semi-modular synthesizers like the Moog Mother-32 and DFAM, arranged for participants to freely explore and create with, guided by tutors. A big part of the process, Guice says, is encouraging young people to confidently explore without fear of doing something wrong. In the past, he has even picked up instruments and placed them on the table to illustrate the point; that these instruments are indebted to their users and not the other way around.

A sound designer by trade, Guice got his first career break after a friend asked him to work as a boom operator on a Pepsi commercial in Los Angeles. It was there that he met director Paul Hunter, also responsible for the groundbreaking Nike Freestyle commercial that Guice still cites as a key inspiration.

Guice soon began working for Hunter, continuing to do so for the next decade. Did the fact that Hunter, a black director, inspired and empowered young Guice to navigate his way through a predominantly white industry play a role in Guice’s desire to empower young people of color himself? ?

“That’s a great question,” says Guice. “But, I know for a fact that my motivation for AFRORACK actually comes more from my relationship with my father.

“I’ve been in LA, it’s been about 10 years. And my mom calls me and says my dad is sick. So I moved back to Chicago and became a caregiver for my dad, who had Alzheimer’s disease. My first interaction with modular was actually around this time, using it with him. I had nothing in Chicago. So I was like, ‘Okay, I need to find a music store! ‘ I went to see classic synths and things like that, but they had this huge room with a big modular case. It was the first time I saw Eurorack modules,” Guice continues.

“Modular is magic like that; the ability to reconnect or even repair connections. When I worked with my dad, it was very relationship-based. Restore connections. Not just socially, cognitively, but the bond between a father and a son. Because I was gone for so long, and coming back, he was so different. I took that experience and turned it into AFRORACK.

Setting up AFRORACK London, Guice explains, required adaptability. “I’ve been coming here for about a year now,” he says. “The thing about AFRORACK is that it should take the shape of the communities it serves. You have to be very careful about this. And that starts with a lot of listening. As we’ve done more and more workshops here, more and more programming, it’s changing and becoming more specific to London. And that’s important, because you don’t want to inadvertently import American trauma in children here.

It’s an excellent observation. “I think the biggest difference between kids here and kids in the United States is that a lot of them know more about who they are,” Guice continues. “They may know where their parents are from; while most children in the United States do not know it. The way slavery has mixed it all up, no one really knows who they are. Identity is an integral part of our internal dialogue. So having these conversations helps inspire positive connections to who they are.

AFRORACK does not exist simply to produce synthesists, of course, but to facilitate new ways of thinking. “Discover the truth and power of your imagination,” reads AFRORACK’s mission statement. “Study and immerse yourself in a ‘state of connectedness’ that expands forward thinking and inspires problem solving.” Generate a space, a whole new universe of possibilities.

These, I suggest, are not simply musical or even artistic principles, but foundational lessons for young people when it comes to developing a sense of ambition and unleashing creativity in any field. . “Right. We have to be responsible for our own communities,” Guice tells us. “The way we do that is to create stronger, healthier, more aware participants. And that starts with children.

“We have a saying: ‘think modular’. As we begin to break down these limiting beliefs, as we begin to “think modular,” all of a sudden everything can be bent, one way or the other. Everything is possible and everything is possible. It’s access, man. It all starts with access. It’s a very simple gesture that leads to all these other things. And I really believe that STEM-related fields will make economic mobility possible for these children. »

Learn more about AFRORACK or support their work (opens in a new tab) on their website.