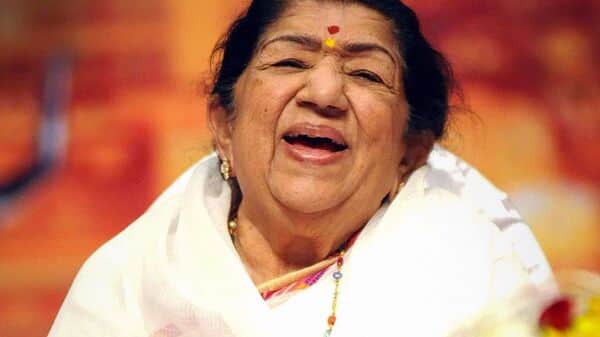 A verse from the Bhagavad Gita. listen now

Lata Mangeshkar sings a verse from the Bhagavad Gita during an Azadi Ka Amrit Mahotsav committee late last year, which was, in fact, the legendary singer’s last recorded message.

Veteran actor Anupam Kher, who recorded it, shared the same on Twitter on Sunday evening saying: During the second Azadi Ka Amrit Mahotsav committee meeting on Zoom in the afternoon of 12/22/2021 , when it was Lata ji’s turn to speak, it was my heart, being a fan, to record her voice! To listen! What did the great singer of the world say?

Listen to it here:

In 2018, she recorded the Gayatri Mantra for the wedding of Isha Ambani and Anand Piramal.

Mangeshkar, who dominated Bollywood music for more than half a century and is considered by many to be India’s film industry’s greatest playback singer, died Sunday morning at the age of 92.

She died in a hospital in Mumbai after being admitted to her intensive care unit several weeks ago with symptoms of Covid-19.

His body was publicly cremated in a Mumbai park on Sunday evening with Prime Minister Narendra Modi and others laying flowers at his funeral pyre.

Prime Minister Modi said: “I am distressed beyond words. Kind and caring Lata Didi has left us. She leaves a void in our nation that cannot be filled. Generations to come will remember her as of a pillar of Indian culture, whose melodious voice had an unparalleled ability to hypnotize people.”

“Lata Didi’s songs have brought out a variety of emotions. She has witnessed the transitions of the Indian film world firsthand for decades. Beyond films, she has always been passionate about India’s growth She always wanted to see a strong and developed India.”

Meanwhile, President Ram Nath Kovind said, “Lata-ji’s passing is heartbreaking for me, as it is for millions of people around the world. In his wide range of songs, capturing the essence and beauty of the “India, generations have found expression of their inner personality – most of the emotions. In Bharat Ratna, Lata-ji’s achievements will remain unmatched.