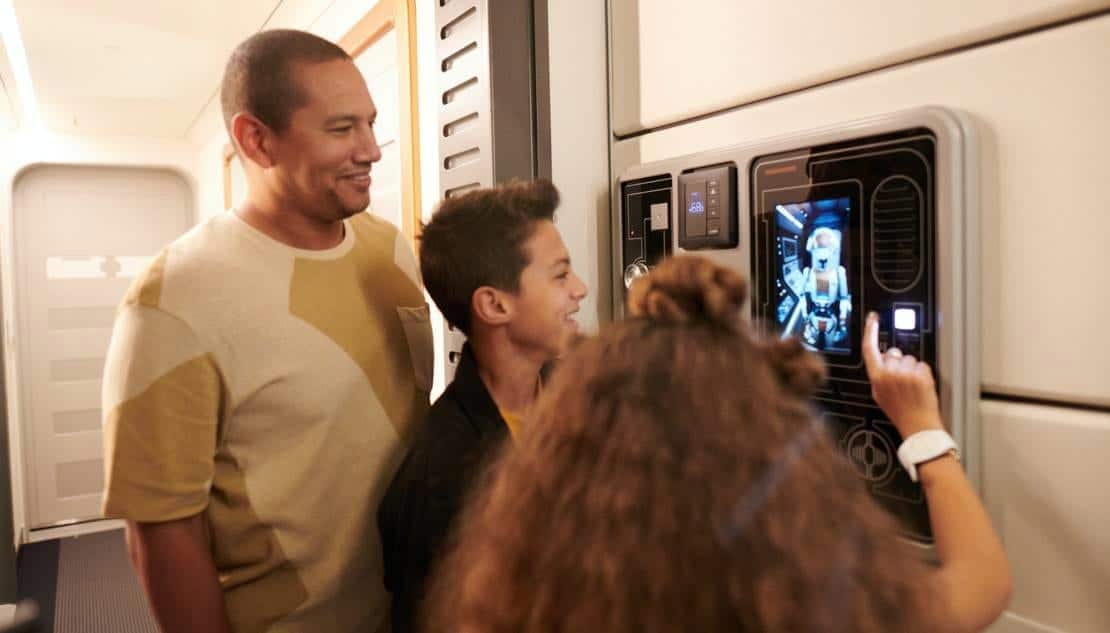 A Starcruiser feature will forever change the experience for Disney guests

When the star wars hotel was originally announced at the 2017 D23 Expo in Anaheim, California, Disney made it clear that for the first time fans from a galaxy far, far away could truly be a part of the star wars story, even role play as their own star wars characters if they wish.

Now Disney has given a first look inside the star wars-themed hotel, which officially “takes off” March 1, 2022, and amidst lightsaber training, delicious meals, and global immersion featuring many new characters from the sequel trilogy era , there’s a lesser-known feature that could actually change the Disney Parks Guest Experience forever.

As a recent article noted:

However, the character that guests spend the most time with is a droid named D3-O9. D3 is an artificially intelligent character accessible in each guest cabin. Each guest essentially has a personal D3 to share their experiences with, talking to them as often or as little as they want. D3 listens, remembers, responds, offers advice and is part of the experience and the story alongside the guest.

The ComicBook.com article then shared that D3 lead designer Imagineer Dawson Dill shared with their writer that:

“As the events on the Halcyon Starcruiser unfold, these events affect her [D3-09] and how they affect it are made up of the decisions the guest makes. From a development perspective, I think it was a fun challenge to bring D3-O9 to life because it was a piece of technology. It uses speech recognition, natural language, comprehension, a whole bunch of sophisticated conversational design technologies that we’ve developed.

This artificial intelligence droid could eventually change the Disney Guest experience at all of the company’s parks and resorts. Imagine, for example, if all hotels at Disneyland Resort and Walt Disney World Resort were equipped with a similar feature, or if a system similar to D3-09 could be accessed on his smartphone 24/7, learning to get to know the customers better at each visit. a Disney property.

The company is already expected to add digital concierge services to all Disney World hotels through a partnership with Amazon.

Related: You Can Unlock A Secret “Chewbacca Mode” On Millennium Falcon

Dillow went on to share that Walt Disney Imagineering is watching this news star wars character as a “stepping stone” to integrate AI into the Disney Guest experience over time:

“Within the R&D group at Imagineering, we’ve been working on this platform and D3-O9 is definitely the first, the limited play test to really put this out there for the first time. But the hope is that “This is a platform that we believe can bring many different Disney characters to life in different ways, across different mediums, and on different platforms. It’s been a long road to get here. We’re looking at a lot things for a while, but this is sort of the first big stepping stone we’ve put in the water.

Despite Disney even going so far as to remove a particular marketing video following intense backlash, social media denounced the first looks at the unimpressive interior as “pathetic,” and Disney executives would be aware that star wars fans are ‘screaming in horror’ over what they’ve seen so far, Walt Disney Company CEO Bob Chapek remains adamant on the whole star wars the hotel experience will leave guests “blown away”.

We do know, however, that the legendary Chewbacca, as well as sequel trilogy characters Rey and Kylo Ren will be on board, and that guests will take a harbor excursion to Batuu’s Black Spire Outpost – but guests who do not choose to cancel their stay will simply have to wait and see what awaits them on board.

What do you think of the impact D3-09 might have on Disney Guests in the future?