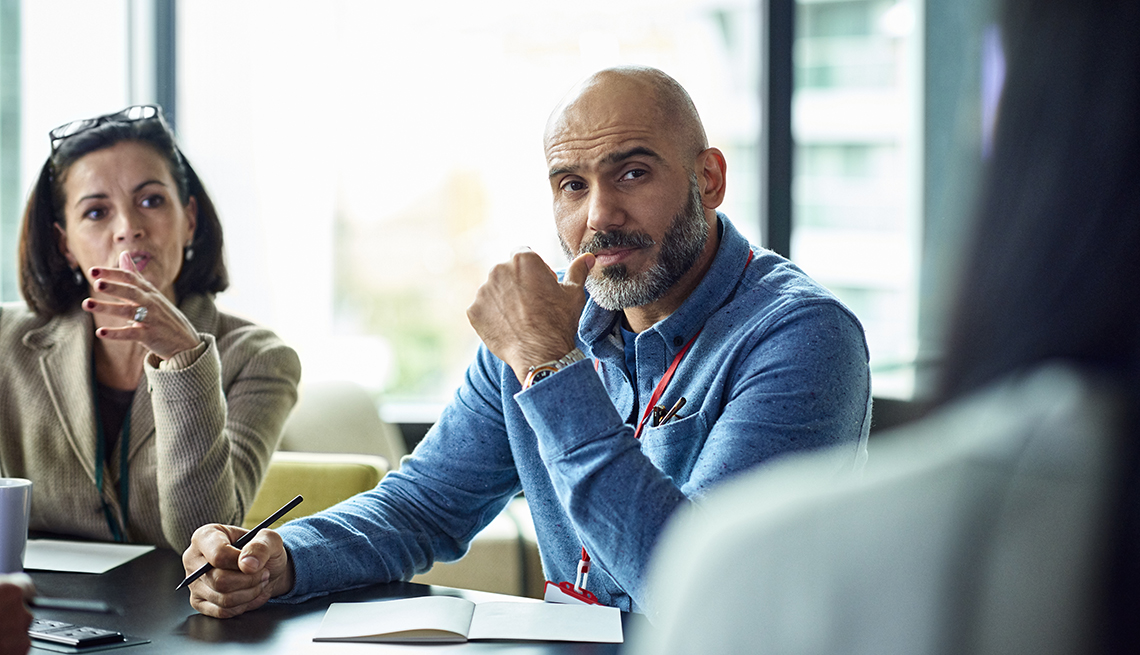 Everything from phone calls and meetings with customers to chatting in the office can be a challenge for hard of hearing workers, affecting an estimated 34.6 million Americans age 50 and older, including 8.5 percent of adults. 55 to 64 years living with disabling hearing loss. Whether you’ve noticed a slight age-related decline in your hearing or are living with long-term hearing loss, these expert-backed strategies can help you succeed in the workplace.

1. Claim the best seat in the house at meetings

“One of the problems with hearing loss isn’t when you can’t hear – it’s when you think you’ve heard well, but you haven’t,” says Lise Hamlin, director of public policy for Rockville, M Hearing Loss Association of America (HLAA), based in aryland. Even with hearing aids, catching every word in a work meeting can be difficult if you have hearing loss, she says.

Choose a seat next to the person leading the meeting to get the best view of attendees’ faces, so you can see their expressions and pick up additional clues by reading lips. “In a big meeting, people talk to the person chairing it,” Hamlin says. You can also seek out a seat in the center of the table near people you have trouble hearing, suggests Shari Eberts, hearing advocate, who shares tips and blogs at Living With Hearing Loss. Avoid seats that face a window and adjust blinds so glare doesn’t obstruct the view of others.

2. Ask for a written backup

Ask for a written agenda before meetings and copies of meeting notes afterwards, Hamlin says. Or write your own summaries of meetings and one-on-ones with your boss or co-workers and ask them to sign off, suggests Eberts. “Don’t be afraid to confirm what you think you heard,” Hamlin says.

3. Use On-Screen Captioning During Virtual Meetings

It’s easier to follow in a virtual meeting when the captions are scrolling at the same time. You can often get a helpful transcript at the end of the call, Hamlin says. Check the subtitling protocol beforehand; on some platforms, you may need to ask someone else to turn on captions before a meeting starts. For example, any meeting participant can enable captions in Google Meet, but the account owner or meeting organizer must enable captions on Zoom or Microsoft Teams.

4. Put your smartphone to work

If you’re using a smartphone, an app that converts speech to text in real time could be useful for phone calls, says Christine Morgan, president of the HLAA’s Twin Cities chapter. “Most people with hearing loss find phones very difficult,” she notes. This is because phone calls lack visual cues and can also vary in sound quality, says audiologist Sarah Sydlowski, president of the American Academy of Audiology and director of audiology for the Cleveland Clinic’s hearing implant program. .

There are several apps that use voice recognition software or, in one case, live stenographers to turn your conversation into captions that you can read in real time on your phone. These include TextHear, as well as free apps certified by the Federal Communications Commission for people who are hard of hearing or deaf, including CaptionCall, ClearCaptions, InnoCaption, CaptionMate, and Hamilton CapTel. Relay apps, such as T-Mobile’s IP Relay mobile app or IWRelay VRS, use a live operator to communicate with the person you’re calling, then type their responses so you can read them.

Similar apps use your smartphone as a microphone and translate speech to text on the screen. These can help you not miss a thing during one-on-one meetings and small gatherings. Speech-to-text captioning apps include Live Caption and eyeHear for iOS devices, ﻿Speechnotes for Android devices, and ﻿Ava for iOS and Android. Apps like these “changed my life,” says Eberts.