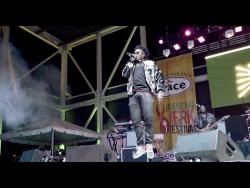 He’s called HonoRebel simply because he’s not afraid to rebel against the status quo, whether it’s personal or musical. He explained that “honor” is aligned with his humility, while “rebel” marks his fighting and warlike spirit.

Born in Rum Lane, downtown Kingston, but raised in August Town, St Andrew, and now living in the United States, HonoRebel has positioned himself as a valuable artist, forging synergies with artists and producers of several genres.

Early in his career, the Honorable Apache, as he was then called, caught the ears of producers such as Willie Lindo, Lloyd Campbell, Black Shadow and Clifton ‘Specialist’ Dillon of Shang Records and showed his courage with a multitude of successes, including hurricane, Materialistic girl, Who Dis Mi Crew and Camouflage. In the mid-90s, he collaborated with reggae greats such as Sly and Robbie and hip-hop legend Luther Campbell, also known as Uncle Luke of The Two Live Crew. By recording with Luke Records, he became a very close friend of Pitbull.

HonoRebel still clearly remembers the year 2009, when he tasted his first No. 1 with the song Now you see it, a collaboration with Pitbull and Jumpsmokers and which also peaked at No. 22 on the Billboard Dance chart. He signs with Ultra Records / Sony Music and releases his first album, Club scene, with Pitbull, Shaggy, Sean Kingston, Trina and DJ Class. In 2016, he saw another significant moment in his career when his successful collaboration with El Micha and Farina earned him a performance spot at the Latin Music Billboard Awards.

His most recent project is a cover of a Beres Hammond classic, If only i knew, a song produced by famous drummer and producer Paul Kastick. A member of reggae group Big Mountain, Kastick originally produced the song with his band, but HonoRebel later dropped a verse and sealed it. The song and video were released recently, and everyone involved is thrilled with the response.

5 questions had a long conversation with the artist, and it would seem that If only i knew could very well be the gateway to reggae music that HonoRebel aspires to cross.

How did you get involved in this project?

Paul Kastick and I have been friends for over 20 years and have worked together on several projects. When he sent me this record in 2019, I asked him why he had siddung it pon. I listened to him, I gave him my opinion and then he sent me on the instrumentation. There was an eight bar trombone interlude, and I pulled it out and dropped my verse. Paul didn’t even know I was going to voice it, but he loved it, and the rest is history.

Tell us about your new 16 track album.

This is my eighth album and it’s called Guru. It was released on August 6. If only i knew is the first song on the album, and I think it’s totally appropriate. I have a couple of feature films on it including Big Mountain, Flo Rida, Prodigy from Mobb Deep and JayRex from Gambia.

How would you describe your music?

I always tell people that I am an international artist. I don’t want to be locked into one category called reggae. My biggest song to date was a collaboration with Pitbull. It was in 2009. The song became number one in 68 different countries. It was an EDM song, and soon after that the trend started in Jamaica to do EDM, and I know my success had a lot to do with it. During my career, I have realized 178 collaborations with international artists. My last album before this was released in 2019 and featured Tessanne, Shaggy, Wayne Wonder and Rik Ross. It was titled Above the noise.

Are you satisfied with your musical success?

Well I can feed my family and I have accomplished what I planned to do. I have a monster record in the UK with an artist from Uganda named Angelina. She says this is the first time her song has toured so many radio stations in East Africa. And I have another song that works extremely well in Italy. But I can never be happy until my own people accept me. I respect my roots. Being abroad and making noise is not the same as being in Jamaica. Shaggy had to come back to Jamaica to get this acceptance.

What do you think is preventing some artists / producers from achieving international success?

Fear. It’s a factor that we have in music and that we have to let go. We need to remove this word from our vocabulary. I am not afraid to experiment with different kinds of music. Reggae music is my foundation, but I feel my creativity transcends beyond that. You can get me into hip-hop, soca, latin, dance, classical, whatever, and I’ll deliver.

A15 Bionic running in the iPad mini 6 has an underclocked processor; Gets beaten by A14 Bionic in multiple tests