Located in Utopia Meyehualco, which is part of the Centro de recreación en la Ciudad de México, the gaming venue allowed participants to enjoy excellent playing conditions in outdoor patios protected from the sun and wind. On a day off, the organizers kindly offered free excursions to the Museo Nacional de Arte, the national museum of Mexican art which features a unique collection of mid-16th-century Mexican art, and the Basílica de Santa María de Guadalupe, an exceptional social and cultural phenomenon that receives more than 20 million pilgrims each year, making it the most visited Marian compound in the world, surpassed among Catholic shrines only by St. Peter’s Basilica. 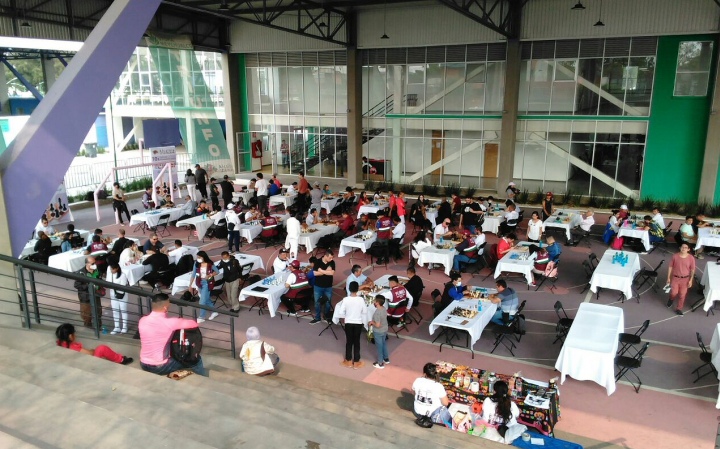 Titles and medals were contested in four categories. The Totally Blind / Women section saw the triumph of Colombian women:

Similar dominance was demonstrated by Colombian players in the Totally Blind/Open section:

In the Visually Impaired / Women section, trophies were awarded to representatives from three different countries:

Finally, in the Visually Impaired / Open section, two players from Venezuela made it to the podium:

The ceremony began with a live rendition of the Mexican anthem and continued with traditional songs and dances performed by artists from Iztapalapa. So the mayor Clara Brugada Molina thanked all participants and officials for coming to Mexico City and reminded them of the rich history of the place which was founded by the Aztecs as Tenochtitlan. For seven days, the most populous city in North America opened its heart to gamers with disabilities. She underlined the excellent collaboration between the IBCA, the organizers and the local authorities which allowed the participants to meet in person in Iztapalapa and play chess.

The 2nd Vice-President of the IBCA, Ms. Diana Tsypin thanked the authorities of Mexico City and Iztapalapa, the local organizers and the members of the Board of Directors of IBCA América for all the hard work they put into this important competition. Fair play and sportsmanship were demonstrated by everyone. The event set new participation records both in number of players and in number of federations represented.

Ms. Tsypina reminded the audience that such a Pan American competition was another important step in the execution of the IBCA’s strategic development plan for 2021-25. IBCA and its National Members – the organizations specifically created to promote Braille Chess for the Blind and Visually Impaired – work productively with respective country governments, NGOs, National Paralympic Committees, the International Sports Federation for the Blind, FIDE and other international organizations. associations as partners respecting each other’s areas of expertise and advancing the goals set out in the UN Convention on the Rights of Persons with Disabilities, the EU Charter of Fundamental Rights and similar documents.

Chief referee Gustavo Vargas Cortez announced the official results. The dignitaries presented the players with medals and trophies. The winners were greeted with thunderous applause. The national anthems of Colombia and Venezuela were played.

The next IBCA Pan American Games will take place in Guatemala.

The International Braille Chess Association (IBCA) is the supreme body responsible for chess for the blind and visually impaired. IBCA is part of the International Blind Sports Federation and is an affiliate member of FIDE. Founded in 1958, the IBCA has grown to more than sixty countries on four continents. Its main competitions include the Blind Chess Olympiad and the World Blind Chess Championships.

Information and photos are provided by IBCA América, the Mexican National Network for the Blind and Alcaldía Iztapalapa.